China’s CCC marking system requires manufacturers of explosion proof products (Ex products) to obtain the CCC Mark before exporting to or selling in the Chinese market.

On the 10th of August 2021, the Certification and Accreditation Administration of the P.R.C (CNCA) announced seven technical decisions related to the CCC certification for potentially explosive atmospheres Ex products compliance. The decisions provide clarifications and guidance for the topics, which may be equivocal and may resolve inconsistencies between the operation of certification bodies previously.

To clarify the CCC scope for tablets and other explosion-protected electrical products.

Following products are in the SCOPE of CCC certification catalog.

Following products are NOT in the SCOPE of the CCC catalog

Handheld terminals can be verified according to the functions specified in the CCC catalog.

To clarify the standard selection for Electrical resistance traces heating.

To clarify the standard selection, Ex-marking, and the thermal cycle testing requirement for the product with dust encapsulated protection.

For the non-metallic material rubber part affects the explosion-proof performance in the product which is applying for CCC certification. If the test sequence specified in the GB 3836.1-2010 is used, the heat resistance test, freezing test, impact test, drop test (if applicable), and the enclosure protection level (IP) test are tested, and an evaluation record is formed in accordance with the provisions of clause 26.1 of GB 3836.1-2010, the aging test of elastic sealing ring material specified in GB 12476.1 could be equivalently replaced. Such replacement should be described in the CCC type testing report.

For dust explosion-proof products, when taking the IECEx TR conversion approach in CCC application, there is no aging test for elastic sealing ring material in IEC 60079-31:2013. However, this testing exists in the GB 12476.1-2013. In this case, no compensation test is required, refer to the above regulation. The evaluation record should be formed according to clause 26.1 of GB 3836.1-2010 and described in the CCC type testing report.

To clarify the Ex-marking for the product with dust intrinsic safety protection.

To clarify the definition of the Ex-component in the context of CCC certification and its certification requirement and management.

For CCC certification, the Ex-marking should be Ex icD 22 Tx℃

Due to the lag behind the standard GB 3836 (from .1 to .9) and GB 12476 (from .1 to .6) used for CCC certification compared with the IEC 60079 series standard. The Ex-marking for the IECEx certified imported product is inconsistent with those in the China National standard.

Based on ensuring safety and no risk of the product, the technical committee agrees on the approach of converting the IECEx to CCC. For the product with Ex-marking Ex ic IIIA/IIIB/IIIC Tx℃ in IECEx , the Ex-marking for CCC could be Ex icD 22 Tx℃. The certification standards are GB 12476.1-2010 and GB 12476.4-2010. 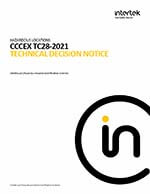 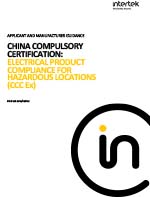 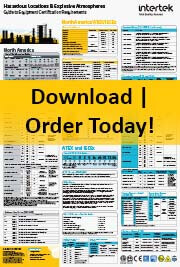 More Events with an Intertek Presence