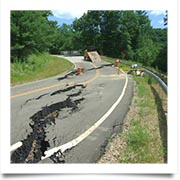 Intertek-PSI Engineers in Columbus, Ohio recently completed one of the more challenging and rewarding projects involving a county road that experienced ongoing slide problems for many years.

Engineers were brought in to explore the subsurface conditions of Ashland County Road 1027 and to provide an understanding of why a new slip occurred and remedy for repair. Engineers determined the slip plane was about 38 feet below the slope surface at one of the inclinometer locations on the slope.  This is significant because it explained why an initial repair by a different engineer did not work. The failure surface was below the repair depth.

To solve this issue, the engineers used GSTABL7 software by Gregory Geotechnical Software to model the slip plane and estimate the shear strength of soils at the time of failure.

The Ohio Department of Transportation developed the software in 2009 which calculates lateral forces against drilled shafts when the slip plane has been established. The software is highly beneficial because it reduces the amount of time to evaluate the optimization of shaft size, spacing and location of the drilled shaft wall.  It is also one of few, if any, types of software that could do this in the past.

Engineers determined that the bottom or toe of the soil mass was somewhere within the lake bottom.  Pleasant Hill Lake, as for most all lakes in Ohio, is man-made. The base of the hillside before the dam for the lake was constructed was not in a submerged state.  This may explain why there had been an ongoing problem for many years in the past.

The ultimate design resulted in a few additional shafts, but the elimination of the lagging resulted in lower construction cost. The wall portion of the project was completed in December 2015 and the roadway opened to traffic in early 2016.