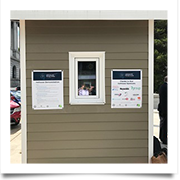 Recently, Intertek partnered with the USGBC Central Pennsylvania chapter in a unique demonstration project designed to illustrate the difference in the energy efficiency of two comparable structures – one built to the current 2009 building code and the other built to “passive house” standards, primarily focusing on the benefit of super insulated buildings with high performance airtightness requirements.

In a warehouse in central Pennsylvania, teams of volunteers built the two identical-looking 8’ x 8’ sheds as facsimiles of modern houses. In the middle of each house they placed solid blocks of ice, each measuring 22.2 cubic feet and weighing more than 1,200 lbs.  Just in time for summer, the houses were moved outside where they were subjected to the natural environment – direct sun and rising air temperatures, to see how long it would take each block of ice to melt. It was predicted that the ice in the house built to the “passive house” code would last twice as long as the block of ice in the house built to the current (2009) standard. Results of the challenge were similar to those predicted; the ice lasted approximately one week in the 2009 code house versus the “passive house” where the ice lasted over two weeks. In addition, temperatures averaged approximately 20°F cooler in the “passive house”.

Intertek Senior Project Engineer Adam Ugliuzza, and Project Lead John Collins consulted with the USGBC on the design of the houses with respect to window performance, enclosure design, position and shading of the buildings, and HVAC duct work. Adam and John performed blower door testing on each house to ensure the houses were built to the representative airtightness requirements. Passive House homes are over 10X tighter than 2009 code built homes. Many would argue this is underestimated as 2009 code homes are not required to be tested to verify their more lenient airtightness requirement has even been met.

Overall the project was a success, as the results indicated precisely what was expected – that insulation and airtightness have a major effect on energy efficiency. Energy conservation is the most valuable energy resource we have. Updating the building code is a key step to ensure energy conservation becomes common practice in building construction.

Looking for a previous post of Intertek's Building & Construction Insights?