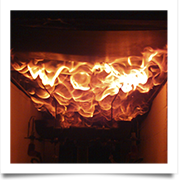 Since the first prototype Steiner Tunnel test apparatus was developed in 1922, and the evolution of flame and smoke tests, ASTM E84 has become one of the most common fire tests required for building materials.

Recent feedback from our clients has suggested that an increase in the variability of Smoke Developed Index (SDI) results has occurred among the testing laboratories, and that manufacturers were increasingly selecting laboratories based on Red Oak smoke area calibration values. To better understand the degree of variability, Intertek initiated an internal review of our equipment, procedures, and calibration results, as well as the ASTM E84 standard itself.

Primarily the result of incomplete combustion, smoke is a mixture of solid and liquid particles of varying sizes dispersed within a turbulent mixture of moving hot air that is combined with gasses and vapors released during the combustion process. Over the years, several studies have documented challenges in the reproducibility of smoke measurement and reporting. Our internal review of historical Red Oak smoke area calibration values indicated an approximate range of 60 to 125, both inter-lab and intra-lab. This observation prompted an internal round-robin experiment among our three labs in the US and Canada using a single lot of Red Oak from a single source.

Results suggest greater inter-source variability among Red Oak suppliers than otherwise appreciated by the test method. Several factors influencing SDI include the configuration of the opening of the vent pipe, the calibration of the photometer system, the moisture content of the wood, temperature and humidity of the room in which the test apparatus is located, and air velocity through the test apparatus. This variability has resulted in a practice of “shopping” labs for the highest Red Oak smoke area. Such a practice goes against the principle purpose of standardization and encourages actions that focus on obtaining the “right” result instead of the accurate result that is representative of the relative comparison as is the stated intent of the ASTM E84 standard test method.

Having identified the issues presented above, Intertek is taking a number of steps to further ensure the accuracy of test results obtained within our laboratory system and to continue doing our part to improve both the ASTM E84 test method and its execution.

Download the full white paper to learn more about lab calibration and the new protocols Intertek has put in place.

Looking for a previous post of Intertek's Building & Construction Insights?