New major investments in the Ports of Antwerp and Rotterdam

Intertek is ready to respond to this new growth.

Since the crisis of 2008, Europe is not in good shape.

A recent article in “The Economist” mentioned the stumbling German growth resulting from austerity and the hesitance in France and Italy to make structural reforms.

Prices are falling in eight European countries resulting in an overall inflation of …0.3%.  The article refers to the impact on the world economy as Europe represents almost one fifth of the world output and is marching towards stagnation and deflation. Europe is called the biggest economic problem.

However, we see some rays of sunshine soon in the Benelux ports of Antwerp (1) and Rotterdam (2) , the two largest European Ports. These ports cater for cargo handling and storage, chemical production sites and refineries and deal with 630 Million Mtons and 43 668 sea going vessels per year (2013 figures).

Over the last 5 years, the investments in new bulk liquid storage for petroleum, petrochemical and chemical products have doubled the storage capacity.  These storages supply the markets that were previously served by European inland refineries that have been closed as they were no longer economically viable.

Major infrastructure works are ongoing and nearing completion. The Maasvlakte 2 project, an investment of € 2.9 Billion in Rotterdam, will increase the surface area by  20% bringing it to a total of 12000 ha.

In Antwerp, the Deurganck lock is under construction.  The largest lock in the world with its length of 500 m and a cost of € 382 Million will facilitate the access and reduce the time in port for the seagoing vessel.

Intertek is ready to respond to this new growth.

With 2 laboratories in Antwerp and Rotterdam, Intertek has already for decades a strong local presence.

With more than 300 employees and state of the art laboratory equipment, Intertek is ready to support the oil and chemical customer’s expansion plans. These labs offer 24 hr. full testing capabilities for crude, petroleum, petrochemicals and chemical products.

In Benelux a number of initiatives are ongoing in order to have a lean operation that is highly reliable through simplification of current systems, process and structures. These initiatives focus on adding value and making it easy for the customer to do business with Intertek.

This way, Intertek Benelux is prepared for the increasing demand for testing and inspection services. It will allow us to grow and increase our market share by delivering operational excellence.

Intertek and its customers will jointly benefit from of these huge new investments reducing supply chain costs and increasing competiveness of the products that are transiting the ports of Antwerp and Rotterdam.

Intertek in the Benelux ports of Antwerp and Rotterdam has lined up the required resources and processes and is ready for these new opportunities.

For more information on Intertek marine and oil & gas services in Belgium and the Netherlands, please visit:

Today’s expert blogger is Roger Degrieck, Site Director and Business Line Leader for Cargo for Intertek in Benelux. He is a member of the Benelux Leadership team focusing on programs for Operational Excellence. Roger is due to retire at the end of 2014, after a career of 40 years in the port in the chemical industry, including the last 15 years with Intertek. 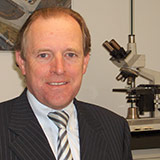