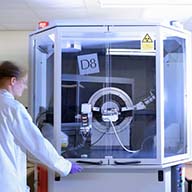 X-ray diffraction (XRD), which provides structural information about crystalline phases, occurs when an incident beam of monochromatic X-rays is scattered by the ordered structure of a crystalline phase. This scattering produces a pattern that is characteristic of the arrangement and identity of the atoms in the structure.

Our specialized team of senior scientists, chemists and analysts in Allentown can use XRD to determine the composition of your sample or confirm that a specific compound is found, whether it is present as a powder, film, flat specimen, or dispersed particle in a liquid matrix. In many instances, an unknown residue or precipitate can be characterized in part using XRD with complementary information from an elemental analytical technique (such as X-ray fluorescence).

For example, corrosion on the surface of a steel pipe may be due to exposure to corrosive agents in a process stream or environment. While an elemental analysis would identify Fe as the major element present in the corrosion residue, it cannot distinguish between Fe containing compounds such as Fe2O3, Fe3O4, FeOOH, FeCO3, etc. that could suggest a source of corrosion. XRD can easily distinguish between these compounds as well as between polymorphs of these compounds such as the three different crystalline forms of FeOOH that could occur depending on exposure conditions.

Our skilled Allentown staff can also use XRD to:

With Intertek as your Total Quality Assurance partner, we can meet all your XRD analysis needs. 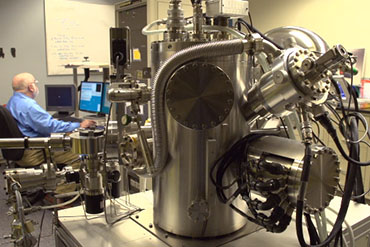