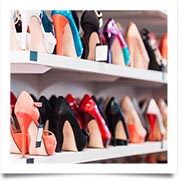 Announcement No. 28431 concerning the auditing of certain consumer products was published by the Turkish Ministry of Economy on October 4, 2012. This announcement became obligatory on November 5, 2012; and the limit for the 6 phthalates listed below was set as 0.1% in total.

In October 2013, the Turkish Ministry of Economy published a new announcement, and the ongoing announcement expired in April 2014. Previously, importers were sending the samples to the laboratories, receiving test reports and uploading those reports to the Risk-Based Trade Control System (TAREKS). Independent from whether a component is accessible, inaccessible or in skin contact or not, all components of footwear were required to be tested.

With the new announcement in April 2014, the Turkish Ministry of Economy started to conduct random inspections in customs. Regardless of whether footwear has a test report or not, a request for a re-test can be made based on the possible risk of both the product and the importer. When footwear is not in compliance with the announcement, this information had to be shared in TAREKS.

Intertek Turkey is an approved, accredited (ISO 17025) third party laboratory and can support the importers for phthalate testing of footwear in order to comply with this announcement.