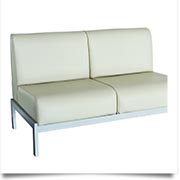 The American National Standards Institute (ANSI) and the Business + Institutional Furniture Manufacturers Association (BIFMA) recently released a new voluntary standard for “large occupant” office seating: ANSI/BIFMA X5.11-2015, General-Purpose Large Occupant Office Chairs. This test standard was developed for manufacturers, specifiers and users to evaluate the safety, durability and structural performance of office chairs for large occupants. The standard is based on a 400-pound user and the amount of force the user would exert on the furniture.

Large occupant office chairs are normally used in an office environment and may include, but are not limited to, seating styles typically referred to as: executive/management, task/secretarial, side/guest chairs and stacking chairs. This standard describes the means of evaluating large occupant office chairs, independent of construction materials, manufacturing processes, mechanical designs or aesthetic designs. This standard does not address lounge seating, stools, flammability, surface material durability, cushioning materials or product emissions.

The original work on a seating standard was completed in May 1974 by the BIFMA Engineering Committee on Chair Standards for General-Purpose Office Chairs with subsequent revisions in 1985, 1993, 2002, and 2011. The original work on this General-Purpose Large Occupant Chair standard was completed in 2014 by the BIFMA Engineering Committee and, particularly by its Subcommittee on Chair Standards. From 2011 to 2014, the Subcommittee on Chair Standards conducted reviews of the draft standard to ensure that the tests accurately describe the proper means of evaluating the safety, durability and structural adequacy of general-purpose large occupant office chairs. The drafts were submitted to the membership of BIFMA for approval in 2013 and 2014.

For more information regarding this standard you can visit www.bifma.org or contact: