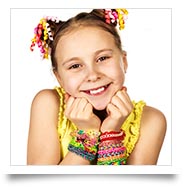 On December 3, 2016, Health Canada published proposali in Canada Gazette, Part I to amend the Children’s Jewellery Regulations, SOR/2016-168. The proposed requirements are intended to improve the safety of children’s jewellery and to align the children’s jewellery total lead content limit with the 90 ppm (mg/kg) total lead limit in effect or proposed under the Canada Consumer Product Safety Act (CCPSA) for other products posing a similar risk.

This proposal would amend the Children’s Jewellery Regulations under the Canada Consumer Product Safety Act (CCPSA) to:

The term ‘children’s jewellery’ as defined by Health Canada in the Children’s Jewellery regulations is “jewellery that is manufactured, sized, decorated, packaged, advertised or sold in a manner that appeals primarily to children under 15 years of age but does not include merit badges, medals for achievement or other similar objects normally worn only occasionally.” [emphasis added]. It should be noted that the children’s jewellery definition in Canadian regulation is slightly different from the definition of children’s jewellery by ASTM in the standard F2923 as well as the term ‘children’s products’ in the Consumer Product Safety Improvement Act of 2008 (CPSIA).

The effective date is proposed to be the sixth months after publication in the Canada Gazette, Part II.

Deadline for submitting public comments is February 16, 2017, which is 75 days after the date of publication of the proposed regulation in the Canada Gazette, Part I.