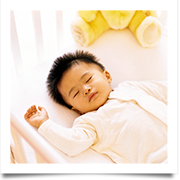 There have been several standards published by CEN (the European standards body) which relate to children’s sleep environment. These standards have been developed in response European Commission mandate M/497 Standardisation mandate on the safety of child-care articles.

What standards have been published?

During 2007-2008, the European Commission carried out a study, following consultations with Member States, which identified the most high-risk nursery products for which there are either no safety standards or for which the existing standard does not cover all the risks.

The main risks associated with these products are as follows:

How has this been addressed?

What does this mean to me?