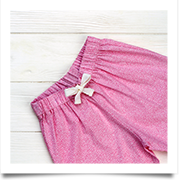 The Technical Report CEN/TR 17376: 2019 has been published. The standard is a guidance document which is intended to clarify the requirements and interpretations of EN 14682. It does not replace EN 14682: 2014 and a revision of this standard is now in progress.

In 2008 an EU Commission report highlighted the need for additional guidance on the use of the standard for industry and market surveillance to explain the technical aspects of garment design and manufacture. Just like adult clothing, children’s clothing is very fashionable and quite often based on adult styles and designs, and as consequence, they change rapidly and could present a hazard to the child. The aim of the technical report is to assist all the stakeholders in the clothing industry.

The technical report is written in a Q&A format and the garments mentioned are examples of frequently asked questions by market surveillance or the clothing industry.

The requests for guidance or clarification are channelled through to the CEN working group via a country’s National committee and then a decision is made as to:

Brief summary of the changes

Out of scope items

The scope lists many items that are listed as “out of scope” but even though they are not included, it doesn’t mean they are safe and should still be risk assessed. This will be addressed in a revision of EN 14682.

Hoods on garments – It has been questioned why hoods are not considered, but a hood is neither a cord or a drawstring and no data collated in the last 5 years has identified a hood as being the cause of entrapment. No action required to amend EN 14682.

Disguise costumes – If the item has cords or drawstrings that do not meet breakaway clause (8.38) then it should meet the requirements of EN 14682. No action required to amend EN 14682.

Braces – These are out of scope and should be used to hold up garments and should be close fitting to avoid any hazards. The wearing of braces off the shoulder and advertising as such is not acceptable on children’s clothing. No action required to amend EN 14682.

Loop in 2.15 – “Attached” means permanently sewn, riveted or similar. To be clarified in revision of EN 14682.

Hoods with a drawstring at the back and side to side channel (Skiwear/outdoor jackets) – Not allowed on young or older children.

Animal ears, antennae, etc. on hood of clothing – These are not decorative cords, they are small fabric panels which are design features of the garment. These each require individual risk assessment based on the requirements and principles in EN 14682:2014 Annex E.

these present no hazard of entrapment and are acceptable.

Snoods (tubular scarves) – Not initially considered during the development of the standard but should be assessed against the relevant clauses in zone A.

Belts with fastening mechanisms permanently attached to garments – Only removable belts were considered initially. Attached belts present the same hazards as functional cords and should be assessed as such.

Shoulder tabs – Even if decorative should meet adjusting tabs requirements.

Drawstrings on board shorts with multiple eyelets – They should be measured from the last exit point.

Dungarees with shoulder straps which fasten to the garment at the waist with free ends which are not totally inside the garment – Allowed if they are no more than 20mm when fastened.