Flow-accelerated corrosion (FAC) is a degradation mechanism that affects carbon and low-alloy steels subjected to elevated temperatures and flow rates, resulting in wall thinning that could challenge the component's structural integrity. Damage due to FAC has been shown to be a function of environmental, hydrodynamic, and metallurgical variables.  The optimum conditions for FAC include a reducing environment, temperatures between 200°F and 550°F, pH less than 9.4, very low dissolved O2, carbon and low-alloy steels with low chromium content, and moderate to high flow velocities.

The catastrophic rupture of the suction line for the train A main feedwater pump at Surry Unit 2 in December 1986, documented in United States Nuclear Regulatory Commission (USNRC) Information Notice (IN) 86-106, and the discovery that main feedwater lines at Trojan had thinned and would trend below the minimum acceptable wall thickness in June 1987, documented in USNRC IN 87-36, demonstrated that single-phase FAC was a potential safety issue at nuclear power plants. In response, the Nuclear Utility Management and Resource Council (NUMARC), a utility-led group, developed recommendations for an aging management program, which were published in Appendix A of NUREG-1344; the proposed aging management program was reviewed by USNRC staff and found acceptable. Subsequently, nuclear plants in the United States voluntarily committed to follow the recommended program. USNRC required utility licensees under its regulatory authority to provide assurances that a long-term aging management program for FAC was being followed in Generic Letter 89-008 (1989).

For nuclear power plants, the feedwater system is a critical safety-related system required for core cooling and accident mitigation, so the aging management program assures the integrity of the feedwater system through regular inspection and trending of degradation. FAC inspection is considered one of the key refueling outage activities. Figure 1 summarizes the impact of recorded FAC events; just 6% of recorded FAC events have no impact on reactor operation, while 7% result in a power reduction, and nearly 17% resulted in a forced outage (either manually or automatically tripped) or limiting conditions on operation. Of the remaining recorded FAC events that occurred while the plant was already shut down, the vast majority (accounting for almost 70% of all the recorded FAC events) have resulted in either unplanned outage work or expanded scope. Clearly, the required aging management program to detect and trend degradation due to FAC has a significant impact on continued safe and reliable operation as well as outage scope management. 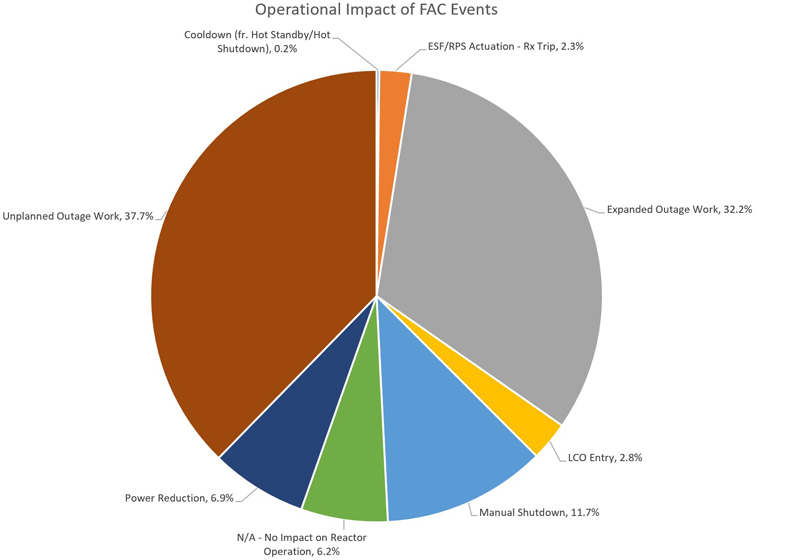 Although each system may have unique conditions and should be evaluated separately, FAC inspection is typically performed on the feedwater piping system fittings (elbows, bends, tees, reducers, expanders), discharge and drain piping, downstream of valves, and feedwater heater shell extraction and drain inlets by using one of several nondestructive examination (NDE) methods: ultrasonic thickness testing (UTT), radiography (RT), and pulsed eddy current (PEC) testing. Positive material identification (PMI) is commonly included in FAC inspections to identify the chromium content in the material as components with even small amounts of chromium content have been shown to be highly resistant to FAC damage.

Each of these NDE methods has advantages and drawbacks.

The main drawback of UTT is the preparatory work in removing and reinstalling insulation. UTT requires direct contact of a probe to the outer surface of the component to be examined. Since the feedwater lines are insulated, the insulation must be removed before they can be inspected using UTT, and the insulation needs to be restored after the UTT inspection. The time required to remove and restore insulation can affect the critical path of the outage schedule, so prioritizing the components and subsystems to be inspected is important; therefore planning the FAC inspection can occupy a significant amount of time even outside the outage execution schedule. If the insulation contains asbestos, removal and disposal time and costs are significantly increased.

The use of RT has proven to be qualitatively effective in the detection of significant wall thinning.  However, RT is highly dependent on the degree of technical competence for interpreting the film and the film/object/source distance impact on the sensitivity of the image, which may introduce unknown errors and inconsistencies in the results.  Another drawback with RT is the requirement to limit access to inspection areas due to high radiation fields.  Digital RT has been very difficult to use for examination of feedwater heater shells.

PEC method addresses both of these drawbacks. PEC is an NDE technique that is capable of quickly screening large areas for significant wall loss, generating thickness values relative to a reference point. The results can be quantified by measuring a set of reference values using UTT at selected locations, limiting the amount of insulation to be removed to a few 6-inch x 6-inch plugs. The PEC tool provides reliable and consistent results. PEC can typically be performed through insulation that has thickness up to 4 inches. PEC is a preferred method by many nuclear power plants as a screening tool because of its speed and reduced ancillary insulation work.

When these NDE methods reveal that the measured wall thickness value is below the design minimum wall thickness (MWT) or will trend to fall below the MWT over the next inspection interval, ASME Code Section XI requires that certain actions shall be taken to disposition the finding. Another Intertek blog provides detailed information on the fitness for service evaluations of these cases. 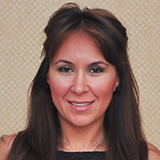 Mrs. Fatma Faham has 15 years of experience in asset integrity management of power generation systems and equipment. Over her career, she has completed a number of stress analysis, design review, inspections, weld repairs, and failure analysis projects. She has performed metallurgical failure investigations and also has experience in data management and analysis for power plant equipment. She is a member of the ASME B31.1 Power Piping Code committee. 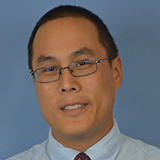