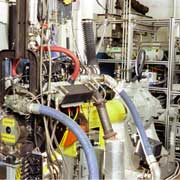 The Sequence IIIGA Test is a fired-engine, dynamometer lubricant test for generating a used oil sample to evaluate the low-temperature performance of automotive engine oils after operation in a high-temperature environment.

Such oils include both single viscosity grade and multi-viscosity grade oils that are used in spark-ignition, gasoline-fueled engines, as well as diesel engines. The Sequence IIIGA Test utilizes a 1996 General Motors Powertrain 3800 Series II, water-cooled, 4 cycle, V-6 engine as the test apparatus. The Sequence IIIGA test engine is an overhead valve design (OHV) and uses a single camshaft operating both intake and exhaust valves via pushrods and hydraulic valve lifters in a sliding-follower arrangement. The engine uses one intake and one exhaust valve per cylinder. Induction is handled by a modified GM port fuel injection system setting the air-to-fuel ratio at 15:1. The test engine is overhauled prior to each test, during which critical engine dimensions are measured and rated or measured parts (pistons, camshaft, valve lifters, etc.) are replaced.

Other Sequence III test methods and related lubricant testing services:
Need help or have a question?